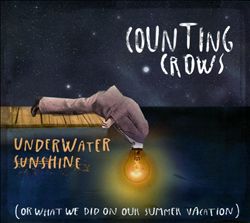 [Typist Notes: Prior to obtaining photo passes for the Reggae Reflection coverage of Sunfest 2012, your local music-writer-about-town took notes on the the first night’s headliners, The Counting Crows]

This Bay-Area band started off its set with one of its first big hits, “Round Here” from its 1993 debut, the well-received August and Everything After. The setlist then jumped to the present day, with the band’s current single  “Untitled (Love Song)” from the 2012 release Underwater Sunshine (Or What We Did on Our Summer Vacation). Rather than the typical set of compositions from frontman Adam Duritz,  this current album is a collection of covers, mostly of obscure material from the band’s influences. Amongst the selections from this album include “Four White Stallions”,  originally recorded by the Patrick Winningham band.

The stage was littered with so many musical instruments, it could have been mistaken for a music store, and the band used every one of them in performing material such as the early hit “Omaha” and the world-weary ballad “Long December”, featuring Duritz on piano whilst providing a nimble vocal performance.

The band concluded its set with a 3-song encore that included the 2002 ballad Holiday In Spain. But what would have otherwise been a satisfying performance was marred by the omission of the popular track “Mr. Jones”. Of course, diehard fans can live without hearing a band’s biggest hit in every performance, but the crowd was clearly disgruntled by the absence of this ’90s radio staple.  Such are the expectations for a festival appearance, where some audience members might only be familiar with the band’s best-known material. 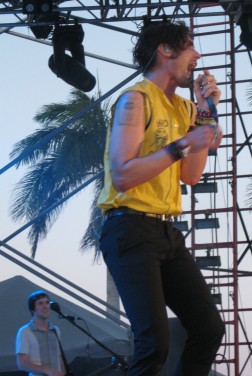 [Typist Notes: The Type Writer has been slacking a little bit with keeping up with this series of blogs about his Sunfest collaboration with Reggae Reflection but he had a good excuse: he had to go to Vegas for his day job. Honest. But more on that in  a later post…]

All-American Rejects kicked off the evening festivities with a bang, giving a performance just as revved-up as the band’s festival debut in 2007. Another act seen previously by The Type Writer was Joan Jett & The Blackheart, who your favourite scribe had caught previously at a much smaller venue: the lobby of the Hard Rock Hotel in Orlando, as part of the monthly Velvet Sessions. But apparently Joan is an artist who rises to the occasion, as her Sunfest performance far outstripped that previous show in terms of raucous energy. Last but not least was San Francisco rockers Third Eye Blind, who played a hit-filled set, complete with a much-extended and sample-enhanced drum solo for the group’s 1997 single, Jumper.