The 2017 edition of this five-day West Palm waterfront music/art festival will take place May 3rd -7th; tickets are currently for sale at discount prices through April 29th. In the meantime, this site will be posting previously unpublished stories from the previous year’s edition.

This story was written in conjunction with Gianna Mascaro of Knight News.com]

This Philadelphia hip-hop/neo soul group is probably best known for its partnership with television host Jimmy Fallon, having been the house band for his previous talk show, Late Night With Jimmy Fallon, and now The Tonight Show.  But the recording career of The Roots, considered one of the most progressive acts in contemporary music, is just as notable as its late-night tenure. Not only has the group been awarded a handful of Grammys in the Rap and R&B categories, it has also amassed gold and platinum records with their studio releases, some of which have included collaboration with artists such as John Legend and Elvis Costello.

For its Sunfest performance, drummer/co-founder Ahmir “Questlove” Thompson took his place behind his kit, signature Afro pick sticking out of his hair.

Questlove (also spelled “?estlove”)  was joined by the rest of the ten-man band in what would prove to be a high-energy performance.  The horn section in particular was showcased, with trumpet solos by David Guy of the Dap-Kings band.

Also featured was Damon “Tuba Gooding Junior” Bryson, who wandered the stage as he played tuba and sousaphone, even venturing out on to the catwalk several times.

All along, the proceedings were presided over by vocalist/co-founder Tariq “Black Thought” Trotter, clad in all white as he rapped over the music and introduced his band-mates to the audience before solos.

Any late-night show band needs to have a number of covers in its arsenal, and The Roots took the opportunity to show off how much of other artists’ music they know. Sprinkled throughout the set was an eclectic set of covers that included hits by the recently-deceased Prince (“Kiss”, “Let’s Go Crazy”), George Thoroughgood (“Bad to the Bone/Who Do You Love”), Damian Marley (“Welcome To Jamrock”), even Led Zeppelin (“The Immigrant Song”). Most songs turned into extended instrumental jams that tended to flow together. The set concluded with a medley that included “The Seed (2.0)”, the band’s hit featuring fellow eclectic musician Cody Chestnutt. 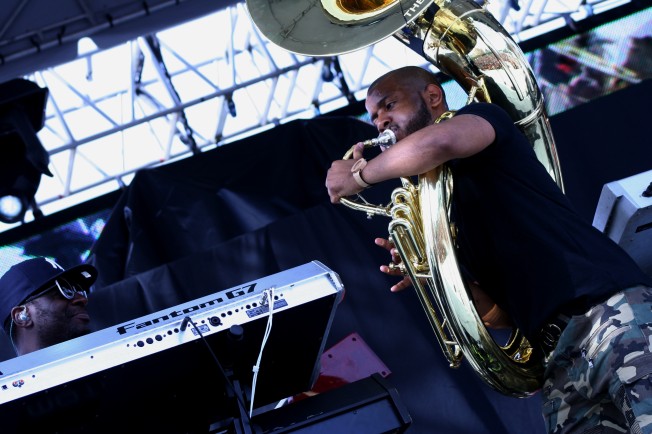 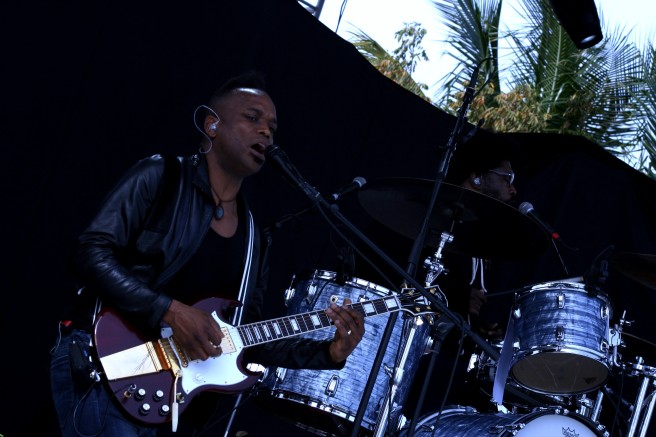