[Typist’s Notes: The reason for the quotation marks in the title will soon become apparent]

This will be the first year in a while that I won’t have press passes for Sunfest, but my press partner Empress K of Reggae Reflection tells me that she will re-post any of my blog posts on the music & art festival, so here’s a quick preview of what to expect this year from West Palm’s biggest event:

Four is Less Than Five

What does basic arithmetic have to do with Sunfest? This year’s edition will be four days instead of five, for the first time in at least twenty-five years. But the number of bands (fifty) will still be the same, because all three stages will be up and running all four days. So no harm, no foul, right? Depends on how diverse your musical tastes are. Every year I run into what I call the Sunfest Dilemma: what to do when two bands I like are playing at the same time. For the first two days of the five-day version of the festival, this problem was always less pronounced, because the two stages in operation those days (i.e. the northern and middle stages, currently sponsored by Ford and Tire Kingdom) were not that far apart. But the southernmost stage (sponsored by JetBlue) is a good mile from the northernmost stage. Trust me, I’ve done this walk, usually at an almost jogging pace. This year, I imagine I’ll be doing it more often.

Stop Me If You’ve Heard This One Before 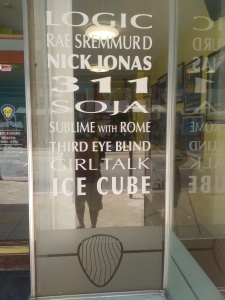 Given the longevity of Sunfest (this is its 36th year) and certain groups’ affinity for the festival circuit, it should come as no surprise that this year’s line-up includes a healthy dose of repeat performers. Artistes like Third Eye Blind and Pitbull are appearing for the second time; 311 and SOJA, for the third time. If you love these performers, or missed their previous appearances, this is good news. But if you don’t care for these particular groups, or are tired of seeing them, then at least you won’t be faced with the Sunfest Dilemma. 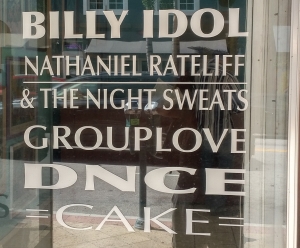 One of the performers that I’m happy is returning is punk/New-Wave legend Billy Idol, one of the headliners for the festival’s new opening night on Thursday. I was living in Orlando when the Sneering One last played Sunfest in 2005, but I remember reading a funny story in the Palm Beach Post about his time here. Apparently Billy happened to meet former Lake Worth mayor Tom Ramiccio, who offered him the Key to the City. Billy was happy to receive the honour, but his manager was less than impressed that Ramiccio was technically no longer in the position to give one out. So as Ramiccio bestowed the honour upon Billy at the front of a ballroom in the now-shuttered Gulfstream Hotel, his manager stood in the back of the room muttering loudly, “He isn’t even the bloody Mayor!” Perhaps Mayor Jeri Muio of West Palm Beach can come up with a more official Key for the former Generation X frontman; his manager would probably like that a lot.

Still Fierce After All These Years

Anyone hearing Living Colour’s first and biggest single “Cult of Personality” on the radio in 1989 could be forgiven for assuming the head-banging hit was recorded by a white hard-rock outfit. But these black rockers were exemplified by the lyric from “Glamour Boys”, another one of their hits: “I’m fierce!” Come rock out to guitarist Vernon Reid’s power chords early Thursday evening.

Let’s face it: the local-music component of Sunfest is less than it used to be. The years of plentiful opening spots filled with top local bands have given way to an era of much fewer slots, one of which is filled by the winner of a Battle of the Bands contest. But against all odds, a few worthy outfits have managed to get on to the schedule, including a couple offshoots of previous Sunfest performer Jumbo Shrimp, Inc. The two principal songwriters for that band, front-man Benny Rothschild and bassist Angel Leiser, have joined forces with drummer Roman Conde to form a new band called Thoughts, which was the name of Jumbo Shrimp’s second album. Benny and Angel’s new band are the first act on the JetBlue stage Saturday afternoon; ironically, the other ex-members of Jumbo Shrimp play later that day on the Tire Kingdom under their new band name Night Box.

I have more thoughts on Sunfest, but this is enough to get you started. Stay tuned…